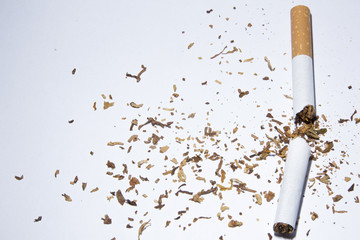 Killing Yourself to Live, the Hard Lines of Smoking and Exercise

Journey with me into the psyche of a fitness-minded cigarette smoker for a bit.

Every morning, you pry your heavy eyelids open and the crust rolls anyway from your soggy marbles. You take your first real inhale of crisp air in and your airways rip apart as the air rushes through the narrowed highway.

Instantly, the rush of the morning’s first breathe turns to a souring burning on the crevices on your sticky tongue. You test your tongue’s tensile strength against your jaw line, rubbing it against the familiar taste that was there the night before.

You’re hungry, your stomach moans with a pleasant reminder, and it’s a workout day – you’ll be planning a hearty breakfast.

Slightly below the surface though, a small battering ram is manned by a thousand tiny barbarians, slamming against the high walls of your encamped amygdala.

The siege is on. You feel like you’re forgetting something.

Before you know it, you’ve located, via smoker’s echolocation, your cigarettes and lighter.

You’ll light up before you’ve spoken a word.

And, the nicotine enters the busted walls of the city with light speed velocities.

The seine is over and it feels kinda good.

An hour later, this will happen, every hour until you can quit. It’s an ongoing war.

I have had many trainees and clients who engage in smoking and exercise over the years.

Sometimes, I have watched these guys (almost always men in public), smoke in front of the gym.

On one hand, you know smoking and exercise do not mix very well.

Because you are fighting yourself everyday, every hour, and the decision you have made to get healthy is always undercut by the urge to smoke.

The fact that it sucks, make you feel like the whole process is harder than it should be. And, it becomes the entire narrative of your life and your fitness.

The excuses build up quicker than typhoon waters:

The truth is, folks who don’t smoke get stressed too but never even think about turning to cigarettes.

Instead of thinking of exercise as coping, you should focus on the things that you happy to workout.

Your family encouragement, your long term health, the relief of endorphins, the freedom you get in gym: these are reasons most of my clients decide to change their lives and workout.

When exercise becomes a way to cope, we get stuck in a And smoking cigarettes is a vicious cycles – maybe THE vicious-est cycle!

Alan Carr, in his book, wrote about smoking: (we) only smoke a cigarette because of the withdrawal we feel makes us want to smoke another one.

That’s it – smoking cigarettes is only A THING because it is A THING.

In other words, it is only that we smoke them, that you need to smoke them, and not because of stress or otherwise.

Inside your body, smoking increases your dopamine and makes you feel stimulated for a while.

Carr says that it takes seconds, less than 5, for nicotine to reach your dopamine deprived brain. That’s the fastest delivery of a substance in existence.

And, it feels good.

But, you are engaging in a vicious cycle within.

Inside your psyche, you are rewarding yourself and that buzz you get is a comforting feeling. You are artificially fulfilling it.

The alternative is in fact doing nothing: but realizing that doesn’t feel good or feel any kind of way to do nothing, makes smokers smoke again, fulfilling Carr’s conjectures.

Truthfully, to combat smoking habits, you need to, as he says, stop now and realize it is gonna be 20 or so days before all the nicotine is out from your system.

In fact, stop today and think that you can reward yourself later.

Realize that the present moment is the perfect moment.

Realize that smoking is fucking up your present moment, 90% of the time.

Exercise is your best friend too, besides cognitively changing.

Exercise increases your dopamine levels. So do foods like bananas,