More than a decade ago, before any carb cycle diet or low carb anything outside of bodybuilding I trained an athletic, pretty, hard working business woman named Kimmy.

She questioned me and her buddy, about eating better to burn body fat.

In response, my best friend and veteran trainer, a former Judo Olympian, and kinesiologist named Marlon, suggested a new way of eating to those curious trainees.

Marlon suggested to her, “starve yourself most of one day and it actually will jumpstart your fat burning systems.”

His words – his blaspheme trudged in a heart-skipping silence.

CrossFit was still an embryo in Scott’s Valley, (50 miles south of our gym) a blip on the fitness radar.

There was ketosis. But no Keto Diet.

There was Paleolethic Man, but only inchoate Paleo Diets. (My trainee Kim soon had me peep Paleo game via one tasty homemade, unsalted granola cluster of organic chaos.)

Marlon’s words were the antithesis of a “fit knowledge” which included pill multivitamins and fat-free dressings as staples. But, that was also Marlon being Marlon.

Looks like the man was ahead of him own time, looking back though.

So, the Carb Cycle diet… works?

I remember thinking, “…that CAN’T be right,” when Marlon explained his method.

Maybe my stomach rumbled around then and I ran my fingers across my intercostal and rib muscles like a xylophone just then.

Rarely did I feel very hungry despite working out constantly during the day back then. Often, I would just eat until fueled.

I rarely every skipped meals.

But, of course, some days, I would eat lunch way later, which would result in a smaller dinner as my metabolism downed – I actually felt hungry.

Again, moments later, I pondered if this pattern was the default eating rhythm of all highly athletic folks like myself, Marlon and the other trainers at our indie gym.

Here’s What a Carb Cycle Diet is, and why is Works on Athletes

Of course science, biology, and nutrition supports this – and it’s not opinion, it’s fact.

Yes, you’re burning fat RIGHT NOW, at rest like everyone at rest.

But, really, to burn quantities where your weight changes, you need your heart rate UP, your VO2 up and your stroke volume UP.

There, however, are OTHER steps to metabolism. Some which might inhibit positive training performance if you skip those steps in favor of carb-restriction.

and as a diet typically, from my own 16 year experience is limiting and stunts active peoples’ progress OVERALL.

Did I lose you? I hope not.

If you have no carbs in your because you restricted them, your body CREATES blood sugar via glucoeneogensis.

This is instead of simply breaking down fat for exercise, even though you burn fat at rest. 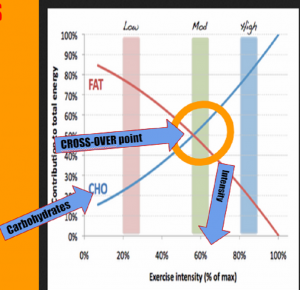 TO BURN BODY FAT at quantity, YOU HAVE TO GET TO THE “CROSS OVER POINT” which takes about 30 minutes.

But, if you reduce your intake of carbs, unless you’re an athlete or quite active, your crossover point occurs later.

Also if you never get your lactate threshold broken, OR, drive your system into anaerobic glycolysis it shifts to the right.

The answer becomes simply: when you need MORE PERFORMANCE or CARDIO RECOVERY, you eat MORE CARBS.

This is the crux of carb cycling.

Packaged as “a cheat day is around the corner,” carb cycling is actually a means of eating I call “staggering” or “PROTEIN staggering.”

Since athletes are concerned with mostly complex carbs and protein, adjusting protein ratios is the best way to adjust carb ratios.

If you are working out at least 3 times per week, you are “active”.

For maintaining BASE calories, athletes require about 200 calories extra per day to maintain mass at minimum.

So, athletes consume more for maintenance in broad terms. This means their metabolism at rest is higher compared to someone who isn’t active.

As such, athletes can sustain a bigger dip in metabolism during “fasted” stages. It might even PROPEL resting1 fat burning.

Because, as we just covered, athletes burn more at rest!

Consider too, that with extra intake in proteins, that athletes consume, they can resist the ketogenic loss of amino acids during medium starvation.

This is why athletes benefit the most from any carb cycling diet.

According to Heathline, one could ante up the carbs on weight training days but that’s a bad recommendation.

Those days are, in the vane of the Vitruvian forebearers of EVERY Keto, Paleo, Atkins and other copycat diets of decades’ past (the bodybuilders), best for upping PROTEIN intake.

Some say Casein in the night, Whey in the morning. This is a more expert recommendation.

Instead, this is a better carb cycle.

Carb cycles, restricted carbing and cycling carbohydrates and proteins is regularly the ONLY BOXED eating patent I pass to current athleteic trainees and has been for about a decade.

And they get RESULTS.

While Precision Nutrition’s blog erroneously supports a carb cycle diet as the domain of “aesthetic athletes” (it’s okay to call them bodybuilders and figure competitors, ;)), this is actually okay for a broader segment of athlete.

“Nutritional adherence” isn’t a thing because diets fail people. And, the ability to stick to a diet actually resides in the resolve of the person doing so almost out of spite!

(It’s a tough pill to swallow maybe but I’ve met hundreds of dieters… their stories are the same.)

I have told a few trainees this advice:

…on cardio days, up your carbs.

But it’s not just lazily Alternating Days of on/off

That’s NOT advice given by experts who have been there, working hard alongside their trainees and athletes.

Instead, focus on anteing up carb intake by adjust protein intake. And, doing so based on the FOCUS of your fitness.

This is premium, nuanced advice.

Athletes have different metabolic needs that those who are not active. Non-active folks on average need A MINIMUM of 150 LESS.

As a result, these folks have lower lactic acid thresholds. They reach the cross-over point later than athletes and thus, may not burn as much FAT or calories (if they cannot sustain hard workouts) as quickly.

These folks will continue to increase conditioning until a point where they can manipulate the SECOND WIND of lactate thresholds.

Athletes, hit that point sooner. And can burn more fat, longer. To hit that point, your body converts to predominantly burning carbs.

With the conditioning to work longer and a minimum of carbs, active folks can spend a LOT of time in fat-burning stages.

This is why we CYCLE.

Or buoy fat-burn in lieu of performance, generally.

And now you know the real reasons why to carb cycle to burn fat!

Many people enjoy fasted cardio because it supports the idea you burn tons of fat. And, YES, it’s true.

But remember, the name of the game is burning CALORIES and not just fat.

Consider that when your body begins to cross over into burning 80% during exercise after the CROSSOVER POINT, you can burn 200 calories in 30 minutes from a nice jog.

That equals 180 calories in FAT.

…you can break your lactate threshold and work harder and burn 50% fat but more total calories.

Despite the nutrition trends in 2019 which come and go, this carb cycle diet idea isn’t the worst.

Maybe the 2007 version of me might be surprised to be satisfied by a “diet.”

Yet, unlike back in 2007, today we have carb-restriction as a part of any carb cycle diet – which are backed by pieces of science – to contend with.

Carb-restriction and low-carb diets which work and don’t, have changed the nutrition landscape.

So you have to get creative.

Low-carb diets don’t work for YOU while they work temporarily for mega-active folks.

But, in the short-term and maybe even every few weeks, you can macrocycle a carb diet.

Furthermore, as a nutrition expert, I recommend PROTEIN STAGGERING –

a way to adjust your food ratios.

By paying closer attention to your protein intake, you can adjust your carb intake.

And, contrary to lazy carb cycle diets, try to pay more attention to your workouts.

From there, you can take note of the intensity. You then can make a decision on the type of carb cycle you wish to engage in.

Is it going to be:

…a cardio day OR

Cardio days are going to in essence require lots of blood glucose and deplete much lower body and lover glycogen stores. Repleting those stores is a must.

So we eat MORE CARBS.

Also, because we want the heart rate and VO2 to soar, we need our energy systems to progress from rest, to lactate threshold, through anaerobic and to pure steady state which requires us to reach the cross-over point.

This point is where we will burn lots of fat during the workout.

Let’s increase out carbs on these days by increasing complex carb post workout and simple carbs before.

Weightlifting-heavy days are the opposite.

Since we need only a minimal VO2 and heart rate change, we can keep fat burning a slower pace. And will still require protein later in the day, POST workout. So we lower the carbs.

Simple! Hopefully, you feel the same.